It is a pretty neat trick that the first PRO Rugby season that does not have a championship game still has a championship game. When Ohio hosts Denver, the winner will end up at the top of the table and, therefore, will be the year one champion.

There are two big questions floating around in my head this week: Who is going to win in the match between Denver and Ohio, and what happened to San Diego? Looking at the talent on the San Diego roster, it is tough to understand how they ended their season at 4-8.

For a start at answering both questions, some numbers.

The full explanation for the Breakers surprising lack of success is complicated, but there is something to look at which is simple. San Diego finished the season winning only 61% of their lineouts. That’s bad, and at the heart of their problems. The fact that the lineout was still sputtering last weekend against Sacramento shows the team did not figure out a way to grow together during the season.

Looking at the league-wide numbers, San Diego is safely at the bottom.

The lineout numbers help make sense of San Diego's woes, but they don't give much insight into the Ohio v Denver match. Yes, Denver has an advantage, but it is a small one. The advantage looks slightly stronger when narrowing the perspective to their previous two matches against Ohio. In both of those matches, the Denver lineout performed better than Ohio's.

Here is an updated look at the hookers and how they fared. 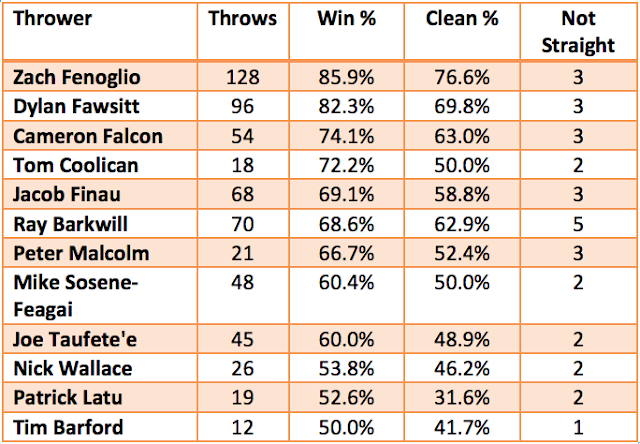 One thing that stands out about PRO's first year is that have been a lot of scrums. The average number of scrums per match is just under 20. That is an improvement from the first few rounds, but still more than the 2015 World Cup average (13), 2015 Six Nations (12), and 2015 European Nations Cup (14).

At this point, Ohio has the best attacking scrum in the league, though Denver is close.

Denver's defensive scrum has been giving the opposition more trouble than Ohio's defensive scrum. In fact, because of their work defensively, Denver gets my vote for best scrum--overall. The number that stands out in the Defensive Scrums table is the 12 steals by Denver.

Ohio has committed the most penalties in the league, and no one is going to catch them in the final weekend. They have also committed more penalties than any other team in their defensive half, and that margin isn't close either.

In the first two meetings between Denver and Ohio, Denver won 28 penalties; Ohio won 19. Denver is the most clinical side in the league at turning penalties won in the attacking half into points, with an average return of just over two points per penalty.

Those figures should give Ohio fans pause. That pause might be interrupted, though, with the recollection that no other side is close to Ohio in the try-scoring department. Heading into this last match, the Aviators have scored 65 tries; the Stampede, 53.

In my mind, Spike Davis might as well be running through a forest in Ohio, felling trees with his shoulder, shouting, "Who cares about penalties? We score tries!" When Davis tires, he walks over to Jamie Mackintosh. Mackintosh hands him some water, pats him on the back in a paternal way and says, "That's right, lad. That's right."

Almost any way one looks at the Ohio attack, it is the best in the league. Looking at set pieces within 30 meters of the attacking try line, Ohio's attack is more potent than Denver's. The table below shows that 25%, or one in four, of Denver's scrums inside 30 meters led directly to a try. That is good, but not quite as good as Ohio.

Both Denver and Ohio have defenses better than the league average.  Looking at the defensive side of set pieces within 30 meters also makes Ohio look good.

Earlier, I wrote that Ohio was the favorite to finish at the top of the table. That means I declared my belief that they would win this match a few weeks ago. Since then, Denver has won a few matches in impressive fashion. And the penalty tallies show how Ohio might make things difficult for themselves.

However, Ohio will be ready to atone for week one when they let the win against Denver slip away.