In the 46th minute of the Major League Rugby final Saturday, Chad London suffered a concussion as a result of being kneed in the back of the head by Seattle second row Cam Polson. The Glendale center then exited the game and didn’t return. It was the second time in the match Polson, who was allowed to play the full 80 minutes, used his knee to strike an opponent laying on the ground.

On the first occasion, in the 25th minute, Polson found himself crouched in front of Glendale’s Ben Landry in a ruck. With hands on Landry’s back but cleats firmly planted in the turf, Polson lifted his leg and drove his knee into his opposite’s back on his way to standing up, prompting John Quill and Landry to confront him in the following seconds. Referee Scott Green, his assistant referees and the television match official, all missed the incident, and play was restarted with a Seattle scrum. No penalty. 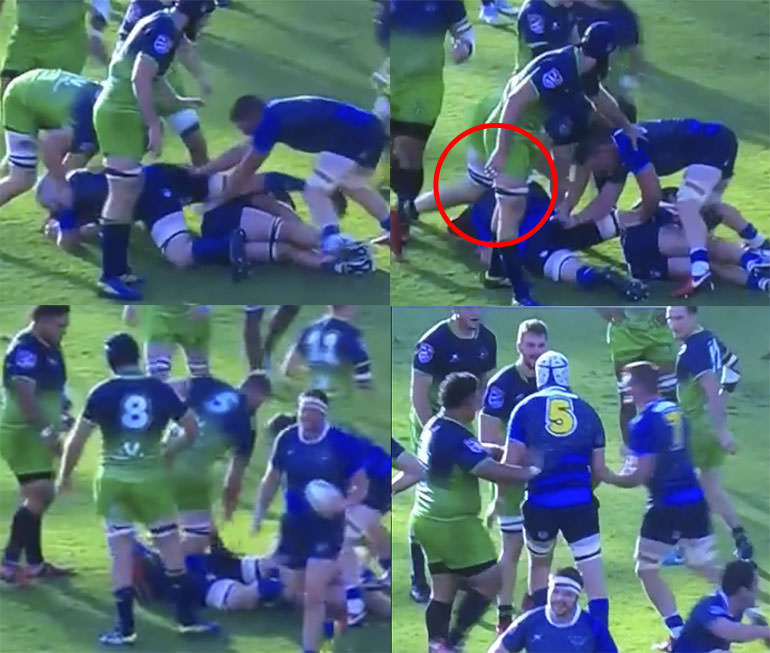 The second offense took place after Taylor Krumrei had tackled London. Polson approached the tackle area from the side, left his feet, and kneed London in the back of the head. This time, Green issued a penalty to Polson for entering the tackle area illegally, but issued no card. 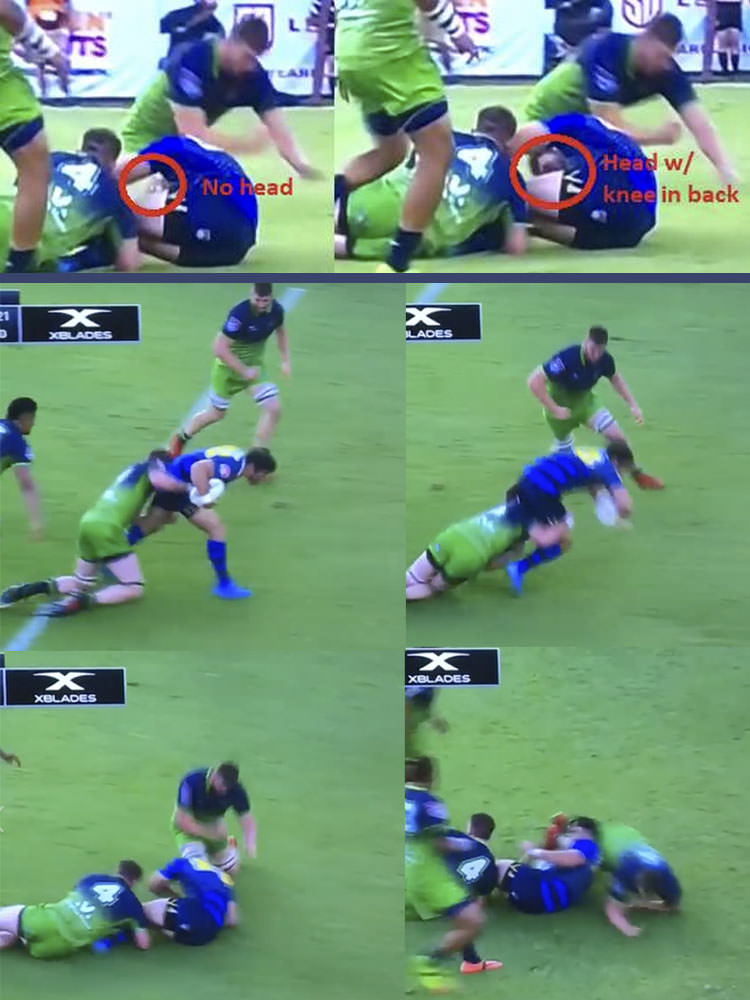 Green called for a video review of the tackle. The broadcast cut away to a previously recorded segment for some time, so the dialogue between the ref and the TMO was interrupted, but ultimately it was decided Polson’s only infraction was entering the tackle illegally.

Those first four paragraphs are objective, verifiable, inarguable facts. The rest won’t be.

The first incident is exhibit b. Without the second incident, it wouldn’t warrant a story on its own. The latter is of much greater concern, as Polson intentionally entered the tackle area illegally and targeted the head of a defenseless ball carrier, causing a concussion.

London had already been brought down. He’d landed on the turf, and Krumrei’s arms were still wrapped tightly around his legs. When London went down, Polson was still feet away. By the time Polson arrived, London already started maneuvering his body to place the ball back toward his teammates.

Then Polson aimed his knee directly at London’s head and dropped his weight on top of him. If you slow the footage down, you can see a point in the tackle where London’s head isn’t visible. It’s then made visible between his left arm and rib cage by the force of Polson’s knee pushing his chin toward his chest, before whipping back after contact.

What makes the play so unacceptable is that the only way to justify it is to argue Polson was so clumsy, he accidentally fell knee-first into London’s head.

There was no legal play to be made. London was already down and Polson on his feet, so even gently sliding into London well below his shoulders and safely away from his head would have been illegal, according to Law 13.4, which states players on their feet and without the ball must not fall on or over players on the ground who have the ball or who are near it.

If you want to give Polson the benefit of the doubt and write off his collision with London as a lack of coordination, fine. But it doesn’t make it legal.

According to 14.11, a tackle ends when a ruck is formed, a player on their feet takes possession of the ball, the ball leaves the tackle area, or the ball is unplayable. Since none of those happened before Polson kneed London, his act was part of the tackle.

As Sonny Bill Williams can attest to, none of those laws account for intent or clumsiness. Breaching any of them should illicit a penalty, no matter what. It’s like going into touch – you may not have meant to, but the second your boot or eyebrow touches the white grass, it’s the other team’s ball.

So by Green’s count, Polson committed one penalty – entering the tackle illegally. By my count, he committed four more simultaneously, all of which amount to foul play. Yet, he continued while London was shuffled off the field and into a head injury assessment.

Where intent comes into play is in the sanctioning. An accidental dangerous tackle warrants the minimum punishment of a penalty, with no maximum listed. A reckless tackle, defined by the player knowing there was a risk of making contact with the head of an opponent, results in a minimum of a yellow card and a maximum of a red card.

Even if Green believed Polson was so clumsy he accidentally kneed London in the head causing a concussion, he handed out the minimum sanction. Intent is very difficult to empirically prove, unless someone uncovers Polson’s diary with a timestamped admission that he intended to knock London out of the game.

Yet, referees at the top level determine intent just about every time someone on the defense goes after a floating ball with one hand. If we can identify and assign intent with knock-ons, surely, we can do the same thing with a rogue knee.

The way I see it, there are only two choices, and this is where exhibit b comes into play. Either you believe Polson is so uncoordinated, so clumsy that he fell on top of London, and, as luck would have it, he did so knee first. And, as fate would also dictate, that knee landed haphazardly on London’s head.

Or, the guy who obviously used his knee to intentionally strike a defenseless player in the 25th minute and got away with it did it again in the 46th minute. This is where I’ll place my bet.

The point of drudging all this up isn’t to besmirch Polson, though he clearly needs to adjust the way he approaches the game. He may be a grand guy who rolled off the wrong side of the bed and made two of the worst decisions of his life Saturday. He may literally be the clumsiest lock in the league. He may have 20 other foul plays on his resume that make these look like jaywalking. I don’t know.

The end goal isn’t to contest the validity of Seattle’s title. The Seawolves did what the referee allowed them to do for 80 minutes, which was play better than Glendale, and they ended up with more points at the end.

It is to protect the game. On one hand, rugby people projectile spew to everyone in ear shot the core values of the game and the characteristics which make rugby a morally superior sport. We can’t then, on the other hand, allow unnecessary, dangerous, fruitless foul play.

We can’t sell the game as a safer alternative to football, which grassroots coaches, parents, players and administrators do on a daily basis, and then allow knees to the head to go unchecked.

Major League Rugby did most everything better than its predecessor, but PRO was proactive when it came to its message on hits to the head, situating a red line across the chest of every jersey and black targets for the tackler’s cheeks on every pair of shorts league wide.

MLR, which boasts the highest standard of the domestic game, brought thousands of new fans to the sport and is its most public face in America, has an obligation to send the message that player welfare is of utmost importance and that when rugby people talk about character and safety, they mean it.

Maybe most importantly, though, it’s to stoke the conversation about brain safety within our own community. It’s been a little over two years since Steve Murra, the revered, famously charming coach of UNI’s women and Midwest Thunderbirds, took his own life. It’s not yet been 18 months since his family revealed the diagnosis of Stage II Chronic Traumatic Encephalopathy, or CTE, the disease that’s taken the lives of countless football players.

Rugby is not immune from concussions. It’s not immune from CTE. And though it may seem so right now as youth participation in gridiron plummets while we still tout a years-old survey suggesting we’re the fastest growing team sport in America, rugby will not be immune from the parental and participatory recoil that goes with public concussion and CTE data.

“When we play rugby, is our head exposed to repeated blows? The answer is yes,” said Dr. Bennet Omalu, the neuropathologist who discovered the disease and is an advocate of outlawing collision sports until adulthood. “So if it does, there is a risk of permanent brain damage, so should children play it? No. The truth is inconvenient.”

Right now, the spotlight rests on gridiron, while the litigious focus has turned to hockey, as the NHL is embroiled in multiple lawsuits with former players. If MLR is as successful as we all hope, it’s only a matter of time before rugby has to answer a lot of tough questions in this country about concussions and safety in general. It’s best to start working on those answers and alibis now, and that starts with making an example of Polson.

It’s also up to MLR to help raise the standard of the domestic game – not just the speed with which the ball emerges from breakdowns or the height of scrums, but when it comes to sportsmanship. The near-total-majority of American rugby is coached, played and refereed by volunteers provided few tools for improvement and keeping pace with the modern game outside of YouTube.

There are those reading along thinking, “those plays aren’t a big deal. This happens every weekend in my club games. I’ve seen worse. It’s part of the game.”

That mentality needs to go away, or at least be as marginalized as possible. If the knee-to-the-head happened during a Lions tour, a Six Nations game or in the Pro 14 final, it would be the talk of international rugby this week, because the professional and international game has gone to great lengths to root out "cheeky" foul play and unnecessary blows to the head.

Brain safety is more important than anyone’s feelings about the game’s perceived waning masculinity or sentimentality for the days of accepted casual raking and eye gouging. Right now, Chad London’s suffering from a traumatic brain injury thanks to a malicious, unnecessary, unsportsmanlike, unacceptable foul play. Doing as much as humanly possible to save everyone in our great game from the same fate is all that matters.

Would love to see the video replay of the two incidents to try come to the same conclusion. If true, that's pretty disgusting and opposite of what rugby is supposed to be.
+1
-24
-1
Well said!
+1
-22
-1
Did not see the first, but did watch the second and the replay that was shown. Certainly a Yellow was warranted and could have been a red if intent applied. Not sure he meant to knee to the head but he certainly did not pull back after the tackle was already made.
+1
-70
-1
The video MLR posted on YouTube doesn't show much (if anything) of the first incident. The second did get multiple replays while the TMO reviewed it. At speed, it's hard to see from the available camera angle whether there was anything more than (maybe) glancing, accidental contact. (No close-up or slow-motion replay was provided the viewer.) The first incident gives it context not available to the casual viewer. Clearly there was no attempt to pull out of the tackle once the ball carrier came to ground. A yellow probably would have been warranted (at minimum), but from the angle on broadcast, it's hard to say that anything more than the penalty awarded was appropriate. I don't intend to disagree with the interpretations here, but do look forward to seeing the broadcast technology (and experience) available to rugby catch up with that of many other sports here.
+1
-33
-1