ARC Stats: Round One

Below are some figures from the first round of the Americas Rugby Championship. What I expect to do throughout the tournament is provide tournament-wide information while looking at everything through an USA Eagle-centric perspective.

Here is the table after the first round.

I was confident that the try-fest that was the 2017 ARC for the USA Eagles and Argentina XV would continue--the Argentina XV scored 32 tries in 5 matches; the Eagles 29. Nope. Both sides wasted opportunities in attack, and the Eagles were fortunate to end up only conceding one try.

The try that the Eagles did score came from Tony Lamborn simply running through two tackles. While the try did follow some sustained pressure, it was not the consequence of anything more than one player running over two defenders.

My initial reaction to the match was, “Man, the Eagles really puttered on first-phase ball in attack.” Having watched again, my initial observation was incomplete.

The kicking from hand was erratic, that is clear. One can see how the kicking tactic can go by watching Will Hooley put up a big kick from inside the USA half with Ryan Matyas chasing at full steam, leading to Argentina being tackled inside their own 22. However, that kick stands out, in part, because of the less successful kicks that surrounded it.

Here are the try totals, including the type of possession that led to the try, for round one.

The most impressive Eagles-related statistic from last year's ARC related to points scored in the final 20 minutes of each match. The USA outscored its opponents 92-21 in the last quarter of their five 2017 ARC matches. The Argentina XV did not score in the second half. The Eagles scored 14 points, 11 of those coming in the last quarter.

The Eagles were behind well into the second half. However, in terms of body language and demeanor, they looked like a side fully capable of winning. That kind of body language observation is meaningless on its own, but the context is an 11-0 scoreline in the last quarter.

Over the last few years I have been looking at where tries come from for the Eagles and their opponents. Additionally, I continue to be interested in how teams decide what to do from a penalty in their attacking half. When the Eagles won a penalty five meters out and chose to scrum, everything I have seen says that was the right decision. The data I have collected show five-meter scrums yield more points than five-meter lineouts, even if a team has a relatively poor scrum. That is, a five-meter scrum is more likely to lead to a try than a five-meter lineout. The Eagles did not score directly from that scrum, but they did score soon after from a different scrum.

The Eagles were competitive in the scrums, though at the end of the match a couple of good scrums from the Argentina XV put the Eagles victory into doubt.

Here are the attacking scrum details from round one. 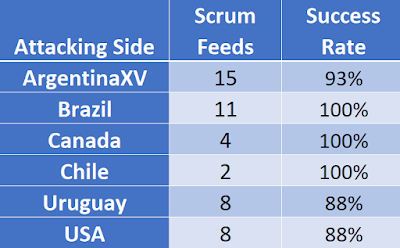 Looking only at attacking scrums alone does not give anything close to a complete or accurate picture of how a team scrummaged.

Here are the details for the defensive scrums for each side from round one. In this table, the lower the percentage, the better. 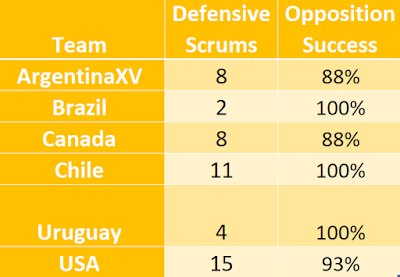 Looking at these two tables, the Argentina pack had the better day.

Referencing the scrums at the end of the match, I counted the last USA attacking scrum as won under pressure. Having watched that scrum over a few times, it still is not clear what the referee signals as the actual penalty. It looks like Cam Dolan was penalized for falling on the ball at the back of the scrum. If the penalty occurred before the scrum was over, then the Eagles look a bit worse and Argentina XV a bit better.

Obviously, a team's ability to win penalties or win a tight head is a good indication of scrum strength. Last spring, I devised a scrum rating system (which I have worked on since then and am not totally abandoning), but for the ARC will use something simpler.

The idea is to note the difference between penalties won from scrums and penalties conceded. Since losing a scrum feed is roughly equivalent to conceding a penalty, in terms of one pack dominating the other, that is also being counted in this simple +/-. Here is how the teams looked in round one. 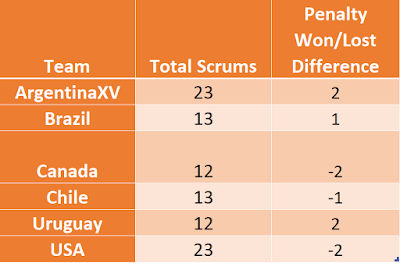 Argentina XV, Brazil, and Uruguay all won more penalties (and/or tight heads) than the opposition. By looking at attacking success, success of the opposition on their scrums, and the penalty differential should give a good picture of which side has the tournament's best scrum.

While it is true that five-meter scrums are more valuable than five-meter lineouts, lineouts inside 40 meters still provide valuable possession. The Eagles on Saturday had seven attacking lineouts within 40 meters, and those led to no tries. This is part of why I thought the Eagles' attack was dull. However, in the fourth minute, the Eagles won a lineout 14 meters out. That led to a penalty, another lineout, another penalty, and then a high-percentage penalty goal attempt. The kick was missed, but that is not the fault of the lineout or subsequent attack. It was an excellent opportunity wasted, but not wasted because of anything in open play.

It was possession from a lineout about ten minutes later that led to another penalty goal attempt for Will Magie, and this time the kick was good. In the second half, two more penalty goals resulted from lineout possession.

Here are the lineout totals from round one. 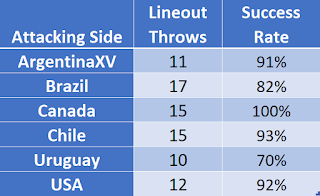 In the second table, again, the smaller percentage, the better. 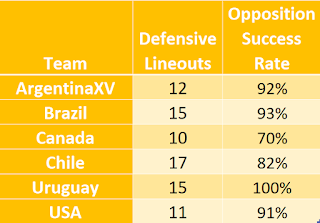