In the first round of the 2019 Americas Rugby Championship, the USA Eagles romped over Chile. They scored 11 tries while conceding only one. Chile was never in the match. The second-round match against the Argentina XV side was never likely to be start-to-finish domination from the Eagles, but few people saw the 45-14 drubbing coming. Gary Gold named the same side in rounds one and two, with the only change being Dylan Fawsitt replacing James Hilterbrand and reserve hooker on the bench.

To start, the Argentinians were ready to take advantage of opportunities early. The first lineout inside the 22, which followed a scrum penalty against the Eagles, exploited something that can be considered an Eagles’ strength. The Eagles, unlike many, if not most, sides in international rugby, compete at the lineout even inside their own 22. In fact, they put two jumpers into the air frequently. Argentina kept a front jumper near the five-meter hash and had the pod at the rear of the lineout start right on the 15-meter hash. The USA scrum half, Shaun Davies, was defending in the five-meter channel with Joe Taufete’e in the defensive receiver position. There were seven Argentinians in the lineout, with the scrum half in the receiver position. The USA did not match, so Argentina had an extra player. 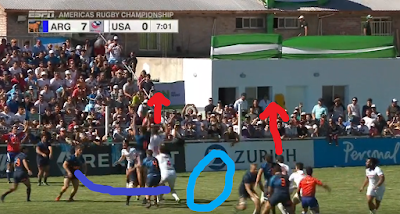 Argentina put both the front jumper and the rear jumper in the air. This engaged two three-player lifting pods by the Americans, importantly, with space between them.

As the throw went to the rear of the lineout, Taufete’e took a couple of steps looking for an overthrow or perhaps expecting the ball to be played off-the-top and quickly to the back line.

Instead, the ball was fed to Jeronimo Ureta, looping into the gap between the jumpers. He was the first player in the lineout, but had not lifted or jumped, so he was free to move into that space quickly.

A neat dissection of an American tendency. Well prepared and well executed.

Several minutes later, the USA desire to compete at the lineout was exploited again. This time, it was a front peel. Expecting that the USA will compete at the front, and so the first player will be lifting and in a poor position to defend, Argentina threw to the front and Francisco Gorrissen peeled into the five-meter channel. Davies was targeted and the move almost worked. Davies dove and made an ankle-tap tackle to slow the momentum and give the Americans a chance to recover.

The defensive aggressiveness at the lineout, over the last 18 months, has worked well for the Eagles on many occasions. This was the first match when a team appeared to show up well prepared to exploit it.

The Eagles did steal five of 17 Argentina lineouts. That is pretty good. However, they also lost three of their nine lineouts--one a clean steal and two not straight.

The Eagles also did not perform well in other key areas. Their key ball carriers had a hard time getting over the advantage line or struggled to retain possession once they did. Too many tackles, especially in the wide channels, were simply missed. In tight, fewer tackles were missed and there were some physical passages of defense, but Argentina were not knocked out of rhythm by the American tackles or breakdown work. In fact, Argentina seemed to have an easy time dealing with would-be American poachers.

The Eagles also failed to take the next box kick, knocking that on and giving possession back to Argentina. Again.

In the ninth minute, after Argentina scored a second try, Argentina cleanly took another restart and, this time, won a penalty. The penalty was awarded just outside the Argentina 22. The kick to touch was booming, and the following lineout was deep inside the USA 22. Three restarts, three times Argentina managed to get into the USA half with possession.

One might have expected the Eagles to win the one-on-one collisions, to be able to get over the advantage line using their big runners. Argentina tackled well, and when the USA did make breaks or half breaks, several ended with knock-ons or other mistakes.

In the first 30 minutes of the match, the Eagles had six opportunities in the Argentina half. The first was around the 10-minute mark. After several phases of good tackling by Argentina, Cam Dolan broke through the line. However, the ball was knocked on in the tackle.

The second opportunity came from a lineout. Paul Lasike crashed over the gain line in the first phase, Dino Waldren did reasonably well on phase two, but then Will Magie’s tip-pass under pressure went forward.

Next was an opportunity that never came to be. Dolan won a penalty at the breakdown inside the Argentina half, but the kick to touch never made it to touch.

Argentina spilled the ball and gifted the Americans possession inside 30 meters. The Eagles rumbled into the 22, but the possession ended just short of the try line when Taufete’e was penalized for not releasing.

With just over a quarter of the match gone, USA had another chance thanks to an Aj MacGinty half break. He off loaded to Taufete’e, but he lost the ball forward in the tackle. A few minutes later, the Eagles were on the charge again, but Davies kicked from the base of ruck without any chasers apparently ready. Argentina took the mark easily.

By the thirtieth minute, Argentina was up 21-0, Lasike was red-carded, and the match was, essentially, over.

If the Eagles capitalized on any of those chances, the match would have had a much different feel. The mistakes the Eagles made are all the sort of thing they managed to mostly avoid in 2018. Those mistakes kept the USA defense under pressure and allowed the Argentina defense to keep the Eagles out of the try zone without much stress.

The Eagles next face Brazil, Uruguay, and Canada. With the Brazilian performance against Canada, and losses to Uruguay and Canada not that far in the past, these matches are an opportunity for the 2019 Eagles to show that the success of 2018 was a meaningful step forward and not a momentary blip.