At the UCD Bowl in Dublin on Sunday, the USA Eagles made it two bonus-point wins from two tries in the Women’s Rugby World Cup. The 43-0 defeat of Spain keeps them tied with England at the top of Pool B with 10 points.

In the second half, the Eagles were simply too strong and scored 31 points. Like the win against Italy, the match against Spain showcased the Eagles’ ambition and potential, as well as an attack hindered by handling errors.

Spain dropped the opening kick and then played the ball from an offside position. USA opted for the scrum inside the 22. The opening scrum was solid from USA, but the solid platform did not lead directly to any points. Spain, though, could not clear the ball out of their own half, and the Eagles soon won another attacking scrum inside 30 meters. On the first phase, Kristen Thomas, Cheta Emba, and Naya Tapper were all involved, and Tapper scored the opening try. Alev Kelter converted to make it 7-0.

During a passage of in which neither side looked sharp in attack, a pair of penalties at the breakdown gave Spain a penalty from a kickable position, but Patricia Garcia’s attempt just missed.

When the Eagles were able to hang onto the ball following a clean attacking scrum in the Spanish half, good runs by Catie Benson and Thomas put Spain under pressure. After winning a five-meter penalty, the Eagles decided to tap and run. The first pass went to Sara Parsons who burrowed close, but not over. Jordan Gray was able to pick the ball from the ruck and go over to make it 12-0 with about five minutes left in the half.

Apart from penalties, Spain struggled to gain territory in attack. Parsons was one of the leaders in defense with several big tackles. However, her enthusiasm backfired when she put in a big hit rather than retreat 10 meters when Spain won a penalty from a scrum. That hit, shortly before half time, earned her a yellow card.

Spain started the second half well, and a good counter-attack by Iera Echebarria helped keep the ball in the USA half. That territory did not lead to points, in part because of errors at the lineout by Spain.

When the Eagles had a chance to clear, Spain pressured Emba well. Rather than kick, she shifted the ball and launched an attack from deep. The ball ended up in Thomas’s hands, who broke free for another big run. Captain Tiffany Faaee, who had several strong runs in the match, kept the attack going before Spain was penalized for a high tackle. The Eagles struggled to turn the pressure into points, but eventually did.

After a cleanly won lineout and another good run by Thomas, Kelter was able to offload to Emba who went in for the try. After 50 minutes, it was 17-0.

Following the restart, Benson made a clean break to put the Eagles immediately back into the Spanish half. A grubber from Emba led to a five-meter scrum for the Eagles. From the back of the scrum, Gray went directly to Tapper. She carried the ball well but her momentum looked to be stopped short of the line. Kelter came in and drove Tapper and the defender holding onto her over the line.

That try made it 24-0, earned the Eagles the bonus point, and ended any possible suspense over the outcome of the match.

The Eagles were not done and continued to win the collision area as Spain struggled to make one-on-one tackles. Kelter won a penalty at the breakdown which led to a 10-meter lineout for USA. The maul was good, and Spain collapsed it just shy of the try line. For that offense, the Eagles were awarded a penalty try to make it 31-0.

In the moments when Spain was able to attack with width, the Eagles had the pace to shut things down.

Replacement winger Jessica Javelet claimed the next try, pouncing on a grubber from Kelter.

A Tapper break from well inside the USA half gave the Eagles momentum and split the Spanish defense. The defense was not able to recover and Hope Rogers bullied her way over from in close.

The Kelter conversion was the last action of the match and made the final score 43-0.

Next up for the Eagles is England on Thursday. 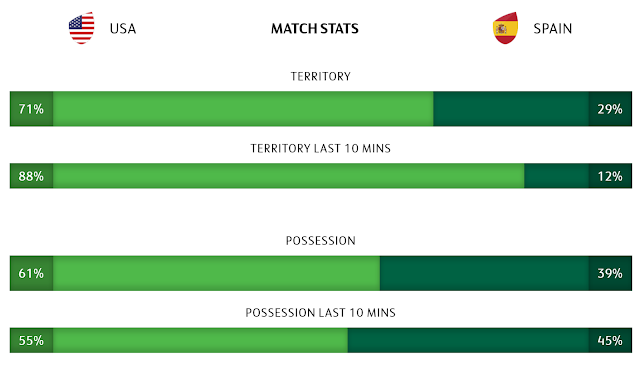