Scrum Effectiveness and Other Eagles' Details

In the broadest sense, the June series of matches for the USA Eagles was successful. They qualified for the 2019 World Cup. In more specific areas, how did they perform?  Below are details for tries, lineouts, and a new approach for evaluating scrum effectiveness.

Below is a breakdown for tries from the June matches. It is only four matches, but scoring as many tries from turnover (4) as from lineouts is not typical. Typically, lineout possession is the clear leader in possession type leading to tries. However, this atypical outcome continues the 2017 trend for the Eagles, who scored tries in the same pattern in the 2017 Americas Rugby Championship. In contrast, in the five combined matches between June and November of 2016, the Eagles scored no tries from turnovers.

Because the USA lineout and maul are functioning well enough, having tries coming from other sources of possession has to be a good thing. It isn’t that the Eagles cannot score from lineouts; they are simply also able to score from more broken play. One of the problems in the first three matches of this June was simply the lack of attacking lineouts within realistic scoring range. In those first three matches, the USA had 13 lineouts within 30 meters; the opposition had more than twice that: 28.

Related to fewer lineout chances, the Eagles conceded 49 penalties over the four matches and won only 26. That is a worrying gap.

Attacking lineouts went well for the Eagles. James Hilterbrand and Peter Malcolm were roughly equally successful with their throws—14/16 and 14/17, respectively. Joe Taufete’e only threw four lineouts, which were all won.

One of the things that these matches have reinforced is another commonly used rugby statistic that is not good enough. The effectiveness of a side’s scrum is often measured by how many of its own scrums it wins. The Eagles did not lose one of their scrums in the four matches. Therefore, by a common method of accounting, the Eagles’ scrum operated at 100%. If that represented how well things actually went, that would be great. That 100%, though, does not convey reality.

To get closer to reality, here is a comparison of the USA and Canada scrums across three matches—the two they played against each other and one against Georgia, a common opponent.

Here is the conventional way of showing how the USA and Canadian scrums performed against each other.

Looks pretty good. And here are how the teams performed in the home-and-away series, plus how they each scrummed against Georgia.

By this conventional measure, it looks like the Eagles’ scrum performed well.

For a more accurate, more complete sense, at the very least, we have to look at what happened on both a side’s scrums and the opponents’ scrums. Beyond that, there is the obvious reality that not all “scrum wins” are equal.

Winning a penalty is the best win possible (for the team—not for the spectators). Conceding a penalty is the worst possible loss. In between those are other outcomes, in descending order: clean ball/free kick, won under pressure, cleanly lost/free kick conceded. A side that wins 10 scrum penalties from 10 scrums is in a separate universe from a side that wins the ball all 10 times, but only under duress and traveling backwards.

With this thinking, I assigned different values to scrum outcomes in an attempt to create a Scrum Rating that takes into account all of the things we already know matter. Then I looked at the USA and Canadian scrums in the two World Cup qualifying matches and each side’s match against Georgia.

With this math the USA scrum earns a negative rating (-9.5), and Canada earns a positive rating (1). Looking at these numbers, and some others for context, it is clear that a side engaged in more scrums will have an inflated rating relative to a side engaged in few scrums. To adjust for that, the “raw” rating was divided by the number of scrums in which a team competed.

Canada is still positive, and USA is still negative.

In order to better understand how well this approach might work, and what these specific numbers really mean, I looked back to the 2015 World Cup, something for which I already have the data. At that tournament, the ratings ranged .30 to -.33. The Eagles won all of their scrums at that tournament, but still had a negative scrum rating.

The table below contains an arbitrarily picked group of nations to help with context. 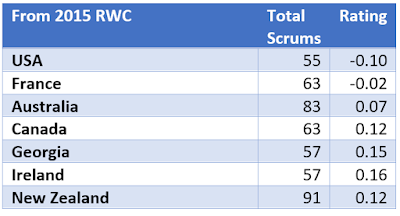 It is not clear to me that the specific values used here are necessarily the best. However, the idea that we can—without too much hassle—work out a number that more accurately reflects the strength of a side’s scrum is something definitely worth doing.

For full transparency, and in the hopes of making constructive feedback easier to give, below are the values assigned to the different scrum outcomes. 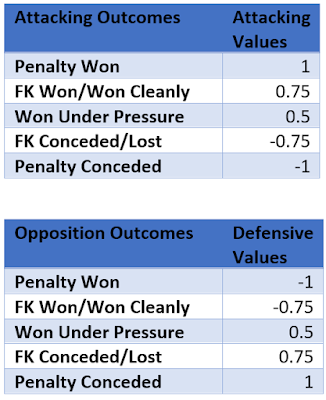