Some Numbers Behind Eagles ARC Championship

The USA Eagles looked like a different side in the Americas Rugby Championship than the team who lost all three of their November matches. They looked confident and fit. They looked like a side likely to win in each match they played.

Before the match against Argentina XV, I looked at some of the things beyond the four wins in the ARC that suggested the Eagles are moving in the right direction. Nothing happened in that final match to change the trends of the tournament. There are lots of things we can list to downplay the Eagles’ accomplishment in winning the ARC. However, this year’s tournament was much like last year’s in terms of the opportunities and obstacles facing the sides involved, including the Eagles. That means that if we compare last year’s details to this year’s details, the comparison is useful.

The USA had the same number of scrums this year as last year. The difference is that they won more this year. On their attacking scrums, the Eagles won four penalties and conceded none. The one scrum that was lost was a free kick. The scrummaging performance overall was not ideal. Defensively, they conceded nine penalties in 41 scrums. Add to that a free kick conceded, and that was a firmly negative response from one out of four defensive scrums.

But the attacking platform was good. There is a big difference between managing to play the ball from the base of a scrum and being able to anticipate clean ball and then attack as planned from a scrum. The USA was able to do as it wanted for most of the tournament, and that is a clear win.

The performance at the lineout remained good. Here are the details for scrums, lineouts, and tries scored and conceded. 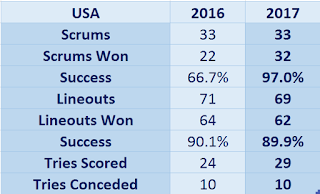 The USA scored five more tries this year than last year. As noted earlier, a larger portion of USA tries is coming from non-lineout possession. Scoring from lineouts is good. Having the mental and physical skills to score in improvisational moments is something that could allow the Eagles to make serious progress against higher-ranked sides. The table below has the breakdown for both 2016 and 2017 ARC, as well and matches from June and November.

At the bottom of this post is an interactive field map with information about all of the USA tries. The blue dot is the spot at which the possession began. Try-scorer, number of phases in the lead-up, score, and time are included for each try.

All of this is good. But the best number is saved for last. The USA finished the ARC matches strong. That was an observation brought home by David Tameilau’s try to finish the tournament. With that observation in mind, I went and checked the numbers. Sure enough, the Eagles outscored their opponents in the final 20 minutes of the matches. This includes coming back to beat Uruguay and coming back to tie Argentina. Between minutes 60 and 80, the score across all five matches for the USA in the ARC was 92-21. That is dominant and deserves its own large--if simple--visual representation. 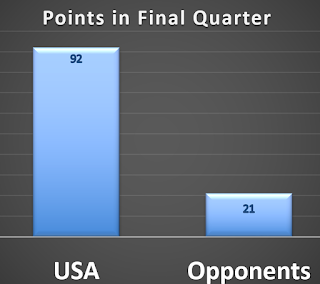