ARC Stats Ahead of Final Weekend

Heading into the last weekend of the 2018 Americas Rugby Championship, if the USA Eagles win, they finish undefeated and win the tournament for the second year in a row. However, a loss to Uruguay will almost certainly allow Argentina XV to claim a second ARC title.

So long as the American scrum does not fall apart, the Eagles should win. Part of what contributes to that "should" is the attacking platform of the lineout.

The Eagles have had the most successful attacking lineout of the tournament. Four different hookers have thrown lineouts through four matches, but they have performed well as a group. 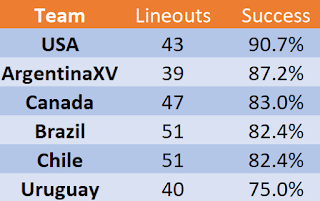 In terms of limiting opposition success in lineouts, Argentina XV is at the top of the list.

Not only have the Americans won the highest percentage of their lineouts, they have also scored the most tries from lineouts. For every 10 lineouts within 40 meters, the Eagles have scored 3 tries in this year's ARC.

Because of this, Uruguay might consider keeping the ball in play within their own half rather than finding touch. Fewer tries are scored, generally, from possessions that start from receiving kicks than from lineouts. That alone does not mean that kicking to touch is bad, of course, but thinking of kicking to touch as the safe option is tricky given how the Eagles are playing at the moment. Further, the Eagles have conceded the most penalties of the tournament, so Los Teros might also keep the ball in hand from deep and hope for a whistle in their favor.

In terms of turning penalties in the attacking half into points, USA has performed best of the sides, and better than in previous competitions. The Eagles have scored 48 points--from penalty goals, tries, and conversions--from 17 penalties won within 50 meters. That works out to 2.8 points per penalty, which is a good return and above their usual return. That bodes well for the match against Uruguay, but Uruguay has performed second best, returning 2.4 points per penalty.

Against Chile, Uruguay feasted on turnovers, scoring three long-range tries from turnover possession. Assuming the Eagles look after the ball better than Chile, the scrum is the most predictable area in which the USA can be under pressure. Uruguay is a well-rounded side at this point with talented attacking players; however, the Eagles have conceded the fewest number of tries, and points, in the tournament.

The details of the scrum do not look as good for the Eagles as the lineout. The Americans have done a reasonable job on attacking scrums, but are in the bottom half of performance defensively. Argentina XV, meanwhile, has the best scrum of the tournament, whichever measurement is used. In attack, in defense, and in terms of plus/minus. (The scrum plus/minus is all penalties and tightheads won minus penalties conceded and scrum feeds lost.)

Argentina XV is at the top of the competition in terms of performance on attacking scrums. 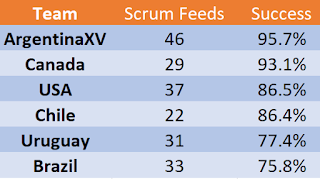 Argentina XV is also at the top of the competition in terms of performance on defensive scrums. 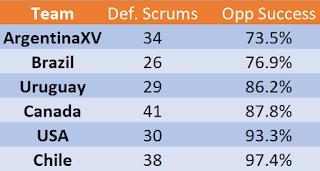 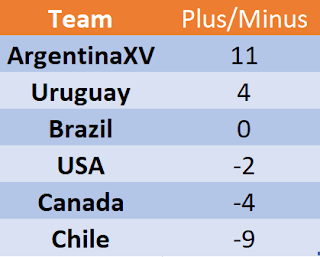 While the Uruguay scrum has been good, as indicated by the Plus/Minus, it has been inconsistent when considering everything.

Likely, the Uruguayan scrum will be the stronger this weekend, but much of what has gone well for Uruguay in the last month has been through taking advantage of errors by the opposition. The Eagles have made plenty of errors in the ARC, but they have also caused, or at least benefited from, more than they have made. That trend should hold this weekend, meaning it will be the Eagles again holding the ARC trophy.