As I was watching Italy v Argentina and thinking ahead to Italy v USA, I thought, “Well, if the Eagles tackle as well as Argentina is tackling, they will be in pretty good shape.”  They did, and they were. The Eagles were in the match against Italy for 80 minutes, which is highly encouraging.

No matter how many positives one might see in the Italy match, and there are quite a few to be seen, it cannot be ignored that is was still a loss. The maps below help make sense of how the Eagles played well and still lost. Hopefully, against Russia they will play well and win. The Eagles have, in the past, struggled to improve in some areas without regressing in others. The match against Russia is a good opportunity to show clear progress.

Coach John Mitchell has mentioned on several occasions fitness and discipline. The USA did not lose that match because of fitness, for sure. Discipline? Well, they committed 13 penalties and won six. Five of those 13 came from scrums, and one came in the desperate final minute. The field below--with Italy as yellow moving right to left and USA as blue from left to right--shows the location of every penalty from Saturday. 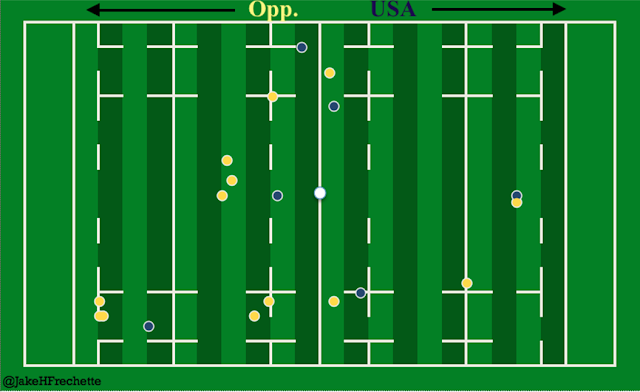 Where did Italy’s points come from?

3: Thretton Palamo reacted aggressively to a loose Italian pass and tackled a man without the ball. It was in a spot that made for an easy kick.

5: The first Italian try was from a rolling maul. The lineout for that maul was the result of a scrum penalty Italy won. It is not direct, but those points were built on the scrum penalty.

3: Another scrum penalty just before halftime.

3: Drop goal. The Italians had a penalty advantage. Had the drop goal been missed, the penalty goal attempt would have been a gimme. The territory leading up to that passage of play was gained from a penalty following a USA lineout that was not won cleanly. These points seem most hurtful. The penalty advantage came when Nate Brakeley went for the submarine tackle and failed to wrap. The Eagles looked relatively comfortable in defense, given Italy were only five meters out. Heroic tackles weren't needed; just a few more good ones. Maybe Carlo Canna still ends up hitting the drop goal, but that penalty made things a lot more comfortable for an Italian side that struggled to break the defensive line all match.

7: Another try from a maul that followed a penalty from a scrum. This time, the Italians did have a threatening move that put them into good territory before the scrum. Had the Eagles not given up the penalty from the scrum, the defense would have still been under some pressure.

3: A final penalty goal. Tony Lamborn was, rightly, desperate to force a turnover and was pinged at the breakdown for being off of his feet.

More tries come from lineouts than any other type of possession, so losing two lineout opportunities inside 30 meters hurts. Having watched USA lineouts closely, it strikes me that the Eagles are still missing the leadership of Scott LaValla.

The USA won three penalties in Italy’s half in the match. Those three penalties netted six points. That is not a bad return. However, Italy won nine penalties inside the USA half. A side with three times as many chances does not need to be particularly clinical to win.

In addition to the map of penalties above, here is another map that helps illustrate why the match turned out the way it did. The map below shows all of the scrums and lineouts from the match. Between the two maps, there is a lot of yellow in the right part of the field, from an Italian perspective. Hover over a dot (or tap on mobile devices) to see the score, the time, and the outcome.