On Saturday night, about 25 minutes into the USA v Russia match, my wife poked her head into the room and asked, “How are they doing?” I didn’t know what to say. They were winning. They clearly looked the better side. But they hadn’t scored any tries yet. Was that good or bad?

I didn’t know how to feel during the match, and I am not sure how to feel now. Was the win over Russia a “good” win?

For sure, I am very happy that I was able to watch the match from start to finish with no interruptions on The Rugby Channel.

In the USA Rugby press release after the match, the coach was not pleased. "We stuck to raising the standard and performance this week and certainly didn't meet the expectations," Head Coach John Mitchell said. "We went backwards a bit this week and we'll have to find out why. The positive was we 'nilled' them.”

USA, in most respects, was dominant in the match.

The defense was, largely, good. The Russians made some mistakes which helped the Eagles keep the score to zero, but it was a good defensive performance.

Aside from the 25-0 final score line, the biggest number from the match is 16-6. That is the final penalty count, with the USA being on the right side of that number. Those penalties cost Russia as Aj MacGinty did not miss a penalty goal attempt. The USA had the ball on the front foot in the Russian half enough times that perhaps committing those penalties was the wise thing to do, with three being less than five and all that. On the other side of the outlook buffet, the Eagles were having so much trouble finishing off attacking moves that maybe Russia should have just let them carry on and waited for a bad pass or other mistake.

USA was 14 from 15 for lineouts. Pretty good, especially when contrasted with Russia’s six lost lineouts.

14 of the 19 scrums were USA put-ins. That’s good. They failed to win possession from four of those 14. (And one of those failures was due to the scrum half, not the actual scrummaging.) Not great, but not terrible.

The USA wanted to keep the ball in the opponent’s half in their June tests. Against both Italy and Russia, when the Eagles had possession inside their own half, they kicked. The outcomes from the kicks justified the tactic for this observer. What happened when they were in the Russian half?

In the first 20 minutes, the USA had six possessions in their attacking half. The first ended with a knock on. The second ended with a tackle into touch from an attempt to go to the narrow side following a lineout. The third ended in a penalty (advantage was over when a USA pass went into touch). The fourth was another penalty (advantage ended when Nate Augsburger tripped at the base of a ruck). The fifth ended with a knock on. The sixth ended when the ball was lost in the try zone at the end of a maul.

And it kept going like that. The USA made some good breaks, but could not manage to turn those breaks into tries. While watching the match live, after each opportunity for a try went by, there was a sense that, “Ah, they’ll get another chance.” Sure enough, they kept creating chances.

Re-watching the match, knowing that only one try was scored, the initial breaks or the start of possession looked so good that I kept thinking, “Wait. They didn’t score a try at the end of this?” Watch this for a quick roller coaster of, "That's so good!" to "Ooh, that was bad."

Against better sides they won’t get so many chances. The danger of the possession fizzled when the play became more fluid and the kind of decisions and specific skills that were needed were not the sort that could have been rehearsed for specifically in the build up. The tactics worked; the execution needed to be better.

If the Eagles are going to target qualification for and wins at the 2019 World Cup, they need to be moving forward. To take a step forward against Russia meant to do more than win, though certainly winning is good.

Here is the map from last week’s match against Italy showing all scrums, lineouts, penalties, and starting point for try possessions. It shows little blue (USA) in the USA attacking half. Contrasting the maps from the Italy and Russia matches immediately shows they were different sorts of matches. 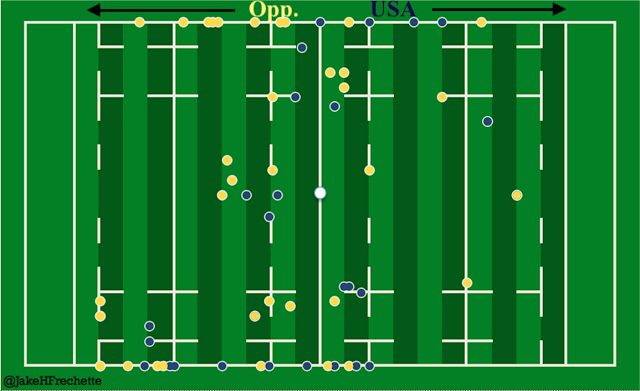 Below is the interactive map from the match against Russia. There is much more blue than yellow, and much of the blue is in the USA attacking half. (Check or uncheck the boxes to filter the information. Hover or tap over a circle for more information on that event.)