The end of the year is a time for reflection, and shortly after the men’s USA fifteen’s team wrapped up their year, Pat Clifton and others asked why 2018 was the best year ever.  What follows here is a look at some of the how the men’s Eagles won 10 of their 12 matches.

In order to achieve a winning record in 2019, the Eagles will need to win all five Americas Rugby Championship matches, plus Canada a second time, then win at least one match against  Samoa, Japan, England, France, Argentina, or Tonga. Looking at some of the details underlying the 2018 success of the USA men’s fifteens gives plenty of confidence that 2019 will be another winning year.

To start with, the Eagles averaged five tries per match, with a total of 60 tries in 2018. That is good, but is actually the same rate of scoring as in 2017. In 2017, they played 11 matches and scored 55 tries, similarly averaging 5 tries per match. That rate is a serious improvement from 2016 when the USA scored 31 tries in 10 matches.

While scoring 60, they conceded 37 tries.

Let’s look at how those tries began.  40% of the Eagles tries started with a lineout, and, separately, 40% of their tries came on the first phase.

One number from the table above that stands out is 11 tries scored from turnovers with only three tries conceded from turnovers. Those three tries conceded came in the two USA losses to Ireland and the New Zealand Maori. The 11-to-3 ratio indicates that the Eagles continue to grow in their ability to turn defense into attack, as well their ability to react quickly from their own mistakes.

In terms of when the Eagles were scoring, they outscored their opponents in each quarter of play, with the biggest differences in the opening and closing quarters. 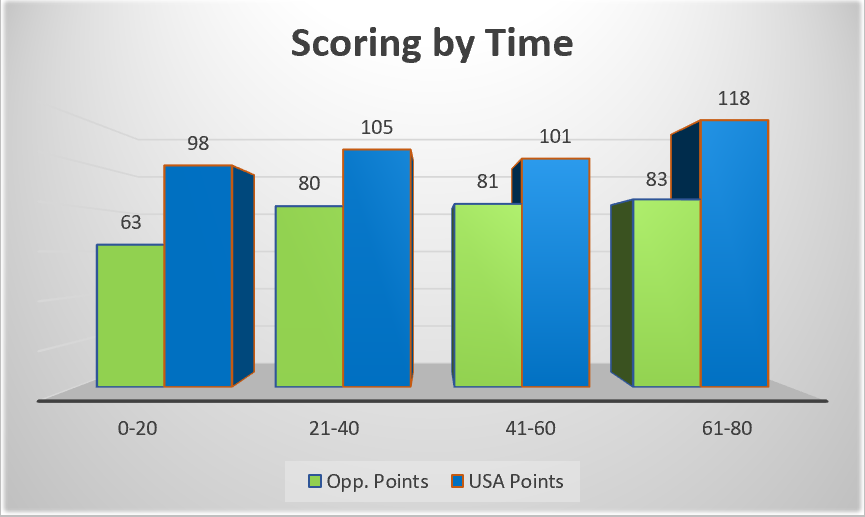 I did sort the data to see if the USA showed any kind of dominance just before and after halftime, but there was no All Blacks-esque spike around halftime.

In terms of where the tries started from on the pitch, just over a third came from possession starting over 40 meters out.

Here is a map of all of the tries the Eagles scored and conceded in 2018. The map can be sorted by attacking and defensive sides, as well as by source of possession and the time of the try.

Throughout the year, they had 27 attacking lineouts within 22 meters, and 7 of those led directly to tries, which is 26%. However, when within 10 meters, it is not clear kicking to touch from a penalty is the best option. Though they had more chances from lineouts, the Eagles were as likely to score from a scrum within 10 meters of the try line as a lineout that close. If the USA is going to pass up penalty goal attempts in order to try and score tries, this fan would be happy to see more scrums and quick taps from within 10 meters in 2019, especially in the Americas Rugby Championship.

Another point that stands out is that 18 tries were scored from a possession that started within 10 meters of the try line. No surprise there.

However, the thing that is surprising is that USA scored as many tries starting from between 41-50 meters as 11-22. While I do not have the 2017 data in an easy to sort manner, the 2016 data suggests this is not a fluke. Why and what to do with that information is not entirely clear, unless one is, like me, looking for more reasons to think quick taps should be used more often.

Like the tries from turnover figure above, this is another indication of the opportunistic nature of the 2018 USA men’s side, and its ability to limit the opposition’s chances to capitalize on USA errors.

The Eagles are still not attempting as many penalty goals as the top nations--18 attempts in 12 matches. 14 of those 18 attempts were made, which is a success rate of 78%. Surprisingly, this is actually better than their opposition. Combined, the USA opposition in 2018 went 12 of 17 (71%) from penalty goal attempts.

Of the regular kickers, the best performer was Aj MacGinty. He was six for six from penalties, and 10 of 15 from conversions for a total of 76%.

While progress is being made, accuracy from place kicking is an obvious place for the USA men to continue to improve. 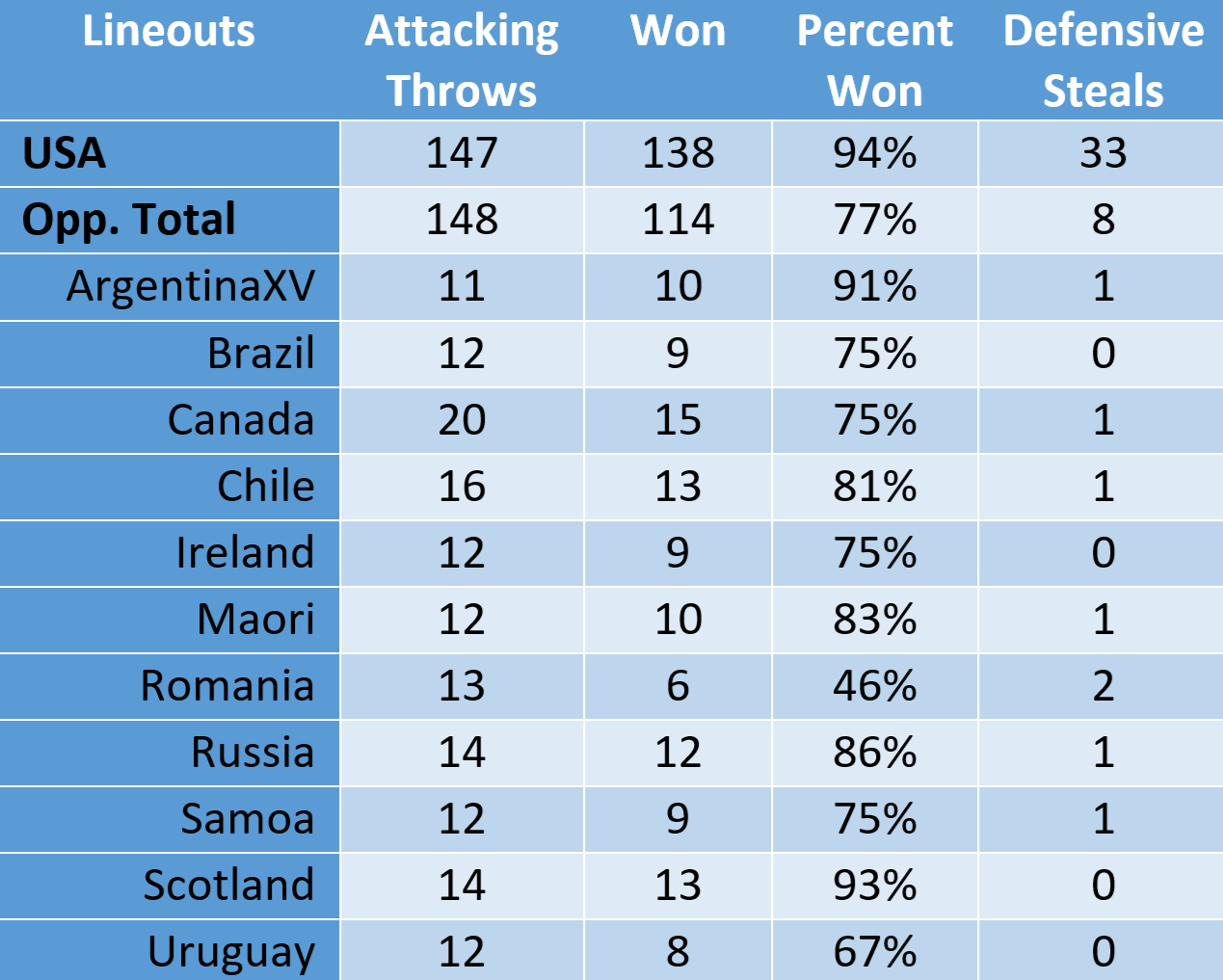 Dylan Fawsitt was the Eagles most accurate hooker, winning 50 of 51 chances. However, Joe Taufete’e was also quite successful, winning 57 from 62 chances. It is worth noting that matches in which Fawsitt played but not Taufete’e include Brazil, Chile, and Uruguay. One would expect the USA lineout to operate with more success against Brazil than, say, Ireland and Scotland.

The thing that stands out from the table above is not only the 94% success rate on attacking lineout, but also the 77% success rate of the opposition. Operating at over 90% while opponents operate under 80% is good stuff.

The Eagles only lost two lineouts inside the opposition’s 22, and one of those was thrown by not-really-a-hooker Hanco Germishuys. While there were certainly quite a few occasions when that good attacking platform was not exploited, winning possession from the lineout was not a central problem. Even better, they stole eight lineouts when defending inside their own 22.

Here is a map of all of the 2018 lineouts, attacking and defensive.

The Eagles won 91% of their scrums. That is not bad, but it is not as good as the 94% success rate of their opponents. It is worth remembering that at the 2015 World Cup the Eagles won 100% of their own scrums while still not really having a strong scrum. In all scrums in 2018, the Eagles had a plus/minus rating of -9. That is all scrum penalties won plus scrums stolen, minus all scrum penalties conceded and scrums lost. Almost 1 in 9 scrums ended in a penalty against the USA.

Looking at the data from scrums, one positive thing that stands out is that the Eagles had more attacking scrums than their opposition. If we think that winning scrums is a proxy for defensive pressure, that is excellent.

10 wins? No. However, the details from 2018 indicate that 2019 should be a more successful year than 2015, the last World Cup year. Even if the World Cup itself is a limited success with one win or even, gasp and sigh, no wins, looking at the details beyond wins and losses will allow us to see how much progress was made during this World Cup cycle.

Everything here is based on my own accounting. When possible, I do my best to check against other sources of published data.