What USA Men Face in Pool A in Rio

In Pool A in Rio, USA plays Argentina first up on Tuesday, August 9. Later on Tuesday, they face Brazil. Fiji awaits on Day Two.

The last three stops of the 2015-2016 HSBC World Series were won by Kenya, Samoa, and Scotland respectively. That shows that the men's sevens world is such that in any given tournament, there are many teams who have the talent to win.

At the Olympics, with only 12 teams, all except Brazil having had to win their way in, lots of teams have good reason to see themselves as realistic medal contenders. The USA, Argentina, and Fiji are all in that group.

The two matches against Argentina this year show how great the USA can be, and how bad they can look. First, the bad: In Paris, Argentina won 36-0.

Argentina seem to be mentally ready for every match, and are ready to take advantage of mental errors by the opposition, as they did in Paris. In addition to their captain, Gaston Revol, Bautista Ezcurra is a slick player. Another player who can turn a match around is Axel Muller who is faster than one might expect from his size. And then there is Juan Imhoff, who looked good in London.

It is true that my perspective is thoroughly American, but the USA seem to have the advantage in terms of personnel. But being the more talented side is not enough. I started to dissect some of the American errors from the Paris match, but it hurt too much. And the kinds of errors they made do not really need dissection or analysis to understand.

In attack, Argentina tend to draw and pass. That seems obvious, but not every side takes this approach. They do not have the pace of some teams, so defenders need to be fixed on the ball carrier before they can shift it wide. 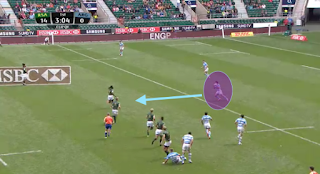 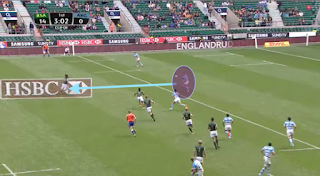 The final pass puts the player receiving the pass into space. 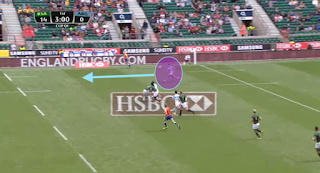 Three of the tries the USA scored against Argentina in Hong Kong show what the Americans are capable of.

The first try was the result of a little patience by the USA, and a little bit of Perry Baker magic. With the ball inside their own 22, they moved the ball from one side to the other, and then back again. Argentina stayed organized at first. However, when one player came up out of the defensive line, Baker was off and away for a try.

As the ball goes to Niua, the defender rushes up to pressure the ball.

He gets to Niua, but not before he makes the pass to Baker. That means that Baker is one-on-one with the last defender. That is too much space to give Baker.

In this build up, lots of little things were done well by all of the American players. Those little things allowed the USA to be patient until the defense made a bad decision. The decision to come out of the line and pressure Niua is something Argentina can get away with against a lot of teams, but they did not get away with it here.

The second try featured an excellent defensive play, followed by two players showing how good they can be. Garrett Bender had some trouble at times when he was the widest defender against Argentina. However, in this instance, Bender made a good tackle, got to his feet, and won the ball. 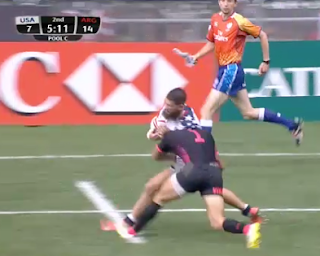 After winning the ball, the USA shifted it to the other side of the field, where Barrett received it just inside the 22. Barrett then did what Barrett can do. He steamrolled through the first attempted tackle. More than 15 meters later, he fought off another tackle attempt.

Then, just over midfield, he deftly passed to Maka Unufe, who spun out of an attempted tackle and burst toward the try zone.

A third try was, again, Baker. He won the ball from the restart, got back to his feet, and outran everyone to score.

Having a player who can, individually, win the ball out of the air while competing against a player being lifted, and then has the ability to leave everyone in the dust on his way to the try zone is a special thing.

Brazil played in three World Series tournaments this year, but did not manage to win a match. Still, if one remembers what happened when the USA fifteens played Brazil in the Americas Rugby Championship, there is slight trepidation in the heart. Daniel Sancery is a dangerous player for Brazil, but the USA should be able to win this match with ease.

Watching Fiji can be a magical experience, but they aren't super human.

The USA did win the last meeting in London. They had other passages of play, including the entire first half of a quarterfinal in Vancouver, when they looked the better side. A win for Fiji is likely, but far from certain.

The Fijian defense is not exceptional.  Good, but not great.  In attack, there isn’t anything particularly intricate. For instance, South Africa, the team who finished second to Fiji in the overall series standings, has some set plays to run from penalties that have dizzying permutations. Fiji doesn't have any of those. They rely on winning one-on-one encounters and exceptionally good support lines.

As much as some people might want to talk about Fiji's flair, there is a simple concept the underlies that impressive play. Here is a moment from a match against France in London. The yellow bars in the picture are, what I am calling, the offload lanes. 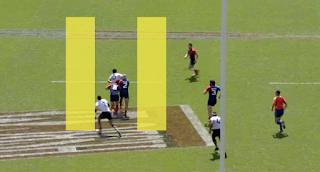 There is a high degree of confidence on the part of the ball carrier, regardless of who that individual is or what the specific situation is on the the field, that there will be someone in at least one of those lanes. That confidence allows for some passes that look risky. The fact that many of the Fijian players can win one-on-one battles means that, like in the example above, more than one defender is needed to ensure the tackle. When that second defender comes in to assist in the tackle, making a pass into the offload lane becomes relatively simple. The picture below shows that simple pass being made to Jasa Veremalua. 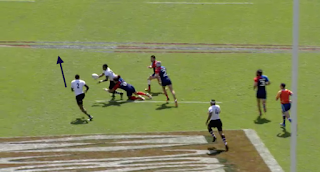 However, Isake Katonibau is also working to get into the offload lane on the other side. Kitione Taliga, who is the ball carrier, could have thrown a pass over his head into the space behind him, and I'd put money on Katonibau getting there to catch it.

If one trusts teammates to get into the right spot, one does not need to look before throwing a pass.

There are lots of examples of Fijian players trusting teammates to get into the right space, and that trust is rewarded far more often than not. In no way is this an exclusively Fijian approach; however, they do it better than anyone else. If a partial or clean line break is made, defenders covering that space as they retreat is critical.

The best way to stop this kind of attack is to not let them have the ball. In their matches this season, USA has given Fiji lots of problems at the restart.

There is no doubt the USA can march right into that gold medal game. There is also no doubt that several other teams have that same potential. Winning the pool sets up a quarterfinal against one of the teams who finish third in their pool.

A Fiji v South Africa final seems the most likely outcome, but if either of those teams is shaken in pool play, anything might happen.