Why This June Was Special

This was a fun month to be a fan of the Eagles. The men’s fifteens defeat of Scotland was the biggest in the team’s history, and the wins over Russia and Canada were convincing and satisfying. Generally, I struggle with optimism. That is, my eyes see the US national teams in the most positive light possible. That makes imagining things like victories over Scotland easy. And I did imagine it. And then it happened!

Why was this match the one that the Eagles were able to win against a Tier One opponent? Has there been a significant change, or did June just happen to hold a bunch of fortunate circumstances for the Eagles?

While Major League Rugby is certainly a factor, the larger factor is the Americas Rugby Championship. The Eagles added five matches every year over the last three years, and that has to have helped the development of individual and of the units within the squad.

To help understand what happened this summer, it is useful to take a glance back at last summer. The Eagles played four matches last summer: Ireland, Georgia, and Canada twice. Of those, the Eagles won one. This June, they played three--Russia, Scotland, Canada--and won three.

Last June: Officially, the Eagles won 100% of their attacking scrums. That does not mean the scrum performed well. Over the four matches last summer, from 56 total scrums, the Eagles conceded 18 penalties and won only one. Ouch. They did manage to steal two Canadian scrums, to make the overall scrum plus/minus score -15. That is absurdly poor.

Against Ireland, the scrum struggles contributed to non-scrum problems since the American loose forwards were focused so much on the scrum itself that Ireland had an easy time making big territory on phase one. Here is what I wrote last summer:

Another area in which Ireland was dominant was scrums. Yes, the USA had five scrums and won all five. Ireland had seven scrums and won all seven. However, there is a big difference in the quality of those wins. Ireland’s scrum gained territory; USA’s scrum survived. Below is a table that shows the difference. The bottom row is an average of the territory gained on the first phase, or from kicking to touch from penalty, following attacking scrums. While both sides won 100% of their scrums, Ireland gained nearly four times the territory per scrum. That imbalance would almost certainly be greater except one of Ireland’s scrum, which was dominant and led to a try, was only five meters out.

Things went very differently against Scotland. The US won a penalty from the match’s first scrum. From then on, even with only seven forwards on the field, and even though Scotland also ended up winning a scrum penalty, it was an even contest in the scrums.

The Eagles were much more successful, including first phases of roughly 35 and 20 meters from two scrums.

This June, from 32 scrums, the Eagles won two penalties and conceded one. The USA did concede two free kicks, one against Russia and one against Canada. However, the one against Canada was for an early shove while Chris Baumann was hooking. Surely, that is the kind of mistake that can be forgiven?

The Eagles still finish the three matches with a net -1 scrum performance. At no point, though, was part of the June storyline, for referees or anyone else, the Eagles’ scrum getting smashed. That is a critical difference between last June and this June.

Chris Baumann was the only prop involved both last June and this June. Kyle Sumsion predicted on Monday Morning Halfback with Pat Clifton that Paul Mullen would end up a regular starter for the Eagles soon, but I am not sure anyone expected him to come right in and start in his first camp with the team. Eric Fry has been given another chance by Gary Gold and continues his steady upward trajectory, and Titi Lamositele was available this summer. Of course, one suspects that having Samu Manoa’s heft and experience in the second row also helps the units’ scrum performance.

Additionally, the scrum performance in the 2018 Americas Rugby Championship was markedly better than in the 2017 ARC. Is it reasonable to think that the USA scrum has turned a corner? Not yet. However, if the scrum performs in November as it did in June? Yippee!

A slight aside, but it is worth noting that in the match against Russia, both American hookers, Joe Taufete’e and James Hilterbrand went off. The Americans did not ask for uncontested scrums. Instead, Hanco Germishuys, a player with minimal hooking experience, stepped into the front row. It would have been easy to point out that both hookers were gone and opt for uncontested scrums. The decision to keep competing suggests a positive, “let’s go get ‘em” attitude.

Against Scotland, the Eagles won a match in which they scored fewer tries. That means they won because of kicking. Look at where Aj MacGinty kicked from in the Scotland match: 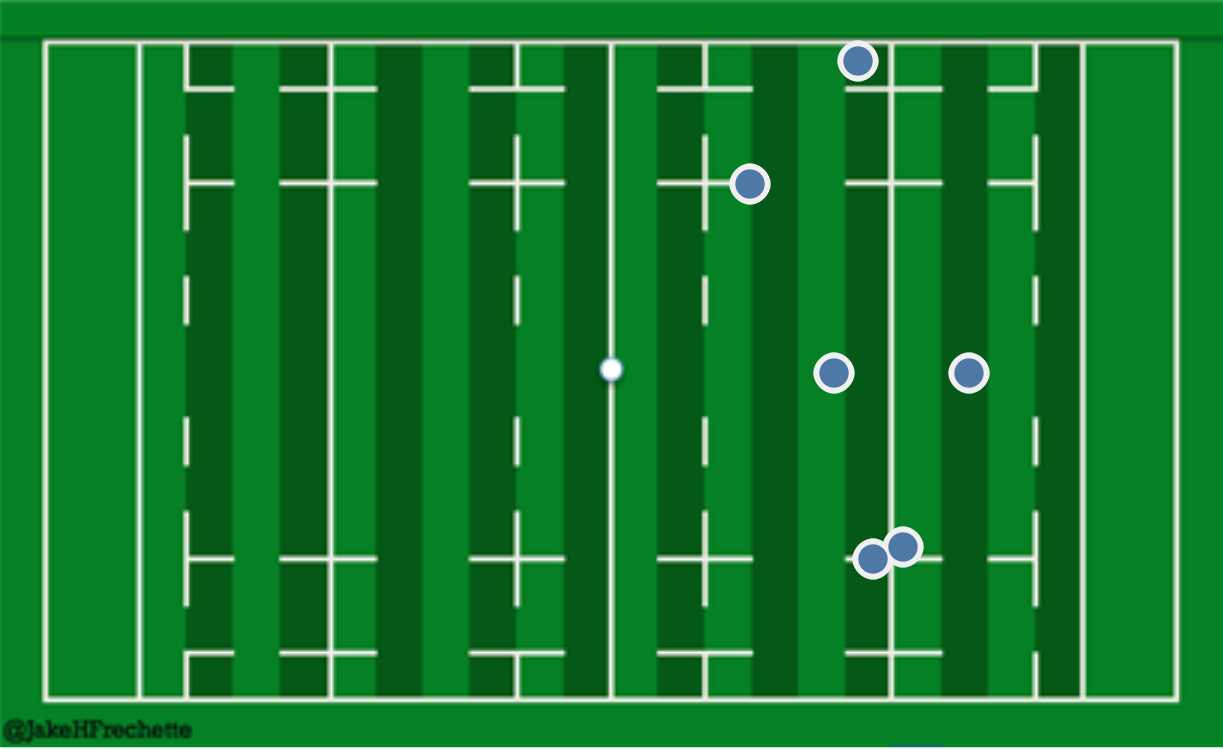 Last June, the Eagles attempted one penalty goal. Goalkicking was not the story last summer. This summer, the USA put up 134 points in three matches, so it might be easy to overlook MacGinty’s goalkicking. Again, against Scotland, the kicking was the difference.

The Eagles needed every one of those kicks, and MacGinty delivered. It is naive to think that the US can assume 100% kicking accuracy every time they play a top ten side, or even that they will out-perform the opposition from the tee.

Several of the Eagles’ biggest names stood out for all of the right reasons. MacGinty and Taufete’e are two players who have been playing for the Eagles for several years now, but they are not the same players they were before. They are better.

MacGinty played well in all three matches. For MacGinty, the things he was good at, he is better at. While some fly halves need front-foot ball to be effective, MacGinty often seems at his wiliest and most effective when under pressure. He can work with garbage.

Taufete’e only played in two matches, but was immense against both Russia and Scotland.

But it is Paul Lasike who contributed something this June that the Eagles simply did not have last year. Time and again, he put the Eagles over the gainline. When the defense focused on him, he put others into space. The sight of Lasike charging in the midfield with Samu Manoa on his shoulder is terrifying.

In defense, he made one apparent defensive mis-read early on against Russia, and then was solid for the rest of the series. His covering tackle that ended a Scottish threat was a thing of beauty and worth taking another look.

A clean break gave Scotland momentum and the Eagles were scrambling. Stuart Hogg realized he had the pace to get past Lasike, but Germishuys stepped in to make the tackle. That left outside center Nick Grigg alone. Lasike recognized what was happening, 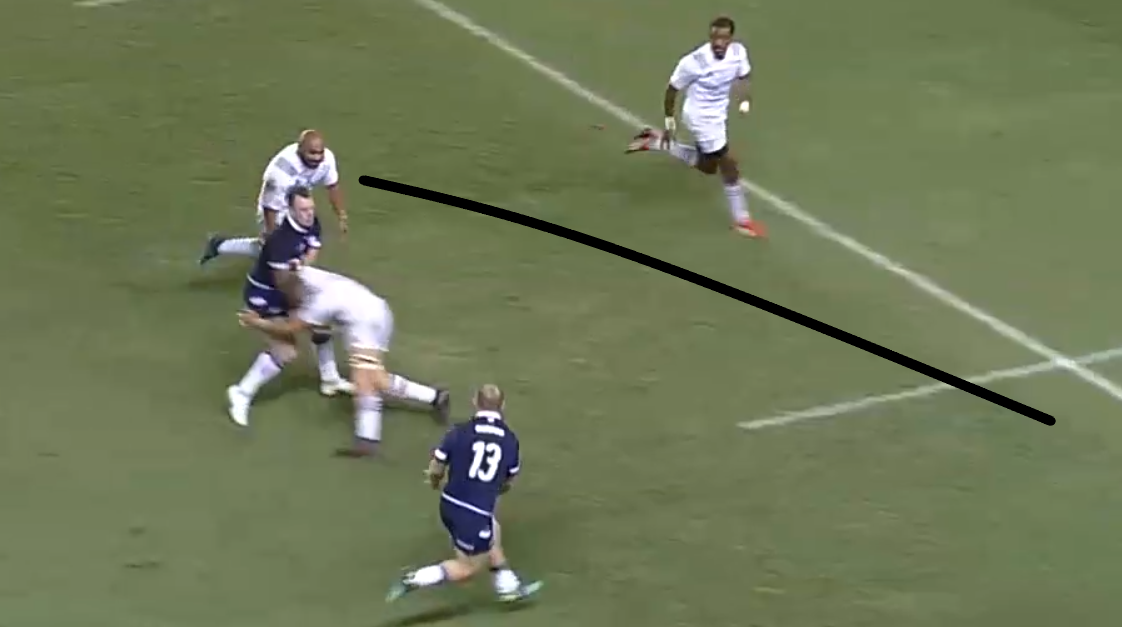 And raced over to slice Grigg down. 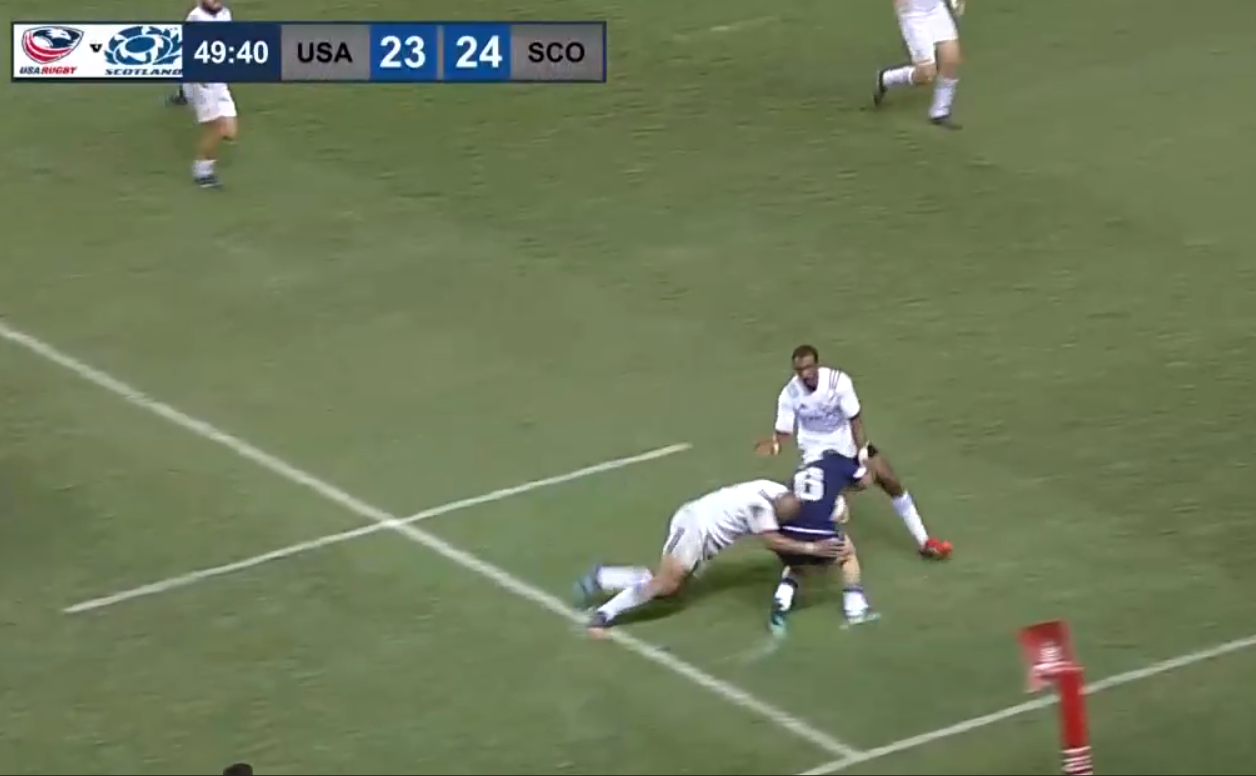 That is serious ground covered, and then a serious tackle that gave John Quill time to arrive and make sure Grigg ended up in touch.

The Eagles won 15 penalties in the three matches. That is a modest total. However, of the 10 won in their attacking half, every single penalty led to points. That includes six from six penalty goal attempts.

The Eagles had eight attacking lineouts inside the opposition 22. Four of those resulted directly in tries. That is clinical.

The Eagles consistently tackled well against Scotland. While they did not win many breakdown turnovers--I counted one--they were able to keep Scotland from making easy half breaks and offloads. There are a lot of moments that illustrate this. One, chosen more or less arbitrarily, followed a USA 22 meter drop-out in minute 23. MacGinty kicked into the Scotland half and number eight Matt Fagerson had a crack at the USA defensive line. He chose his line poorly and was well-tackled by Taufete’e. 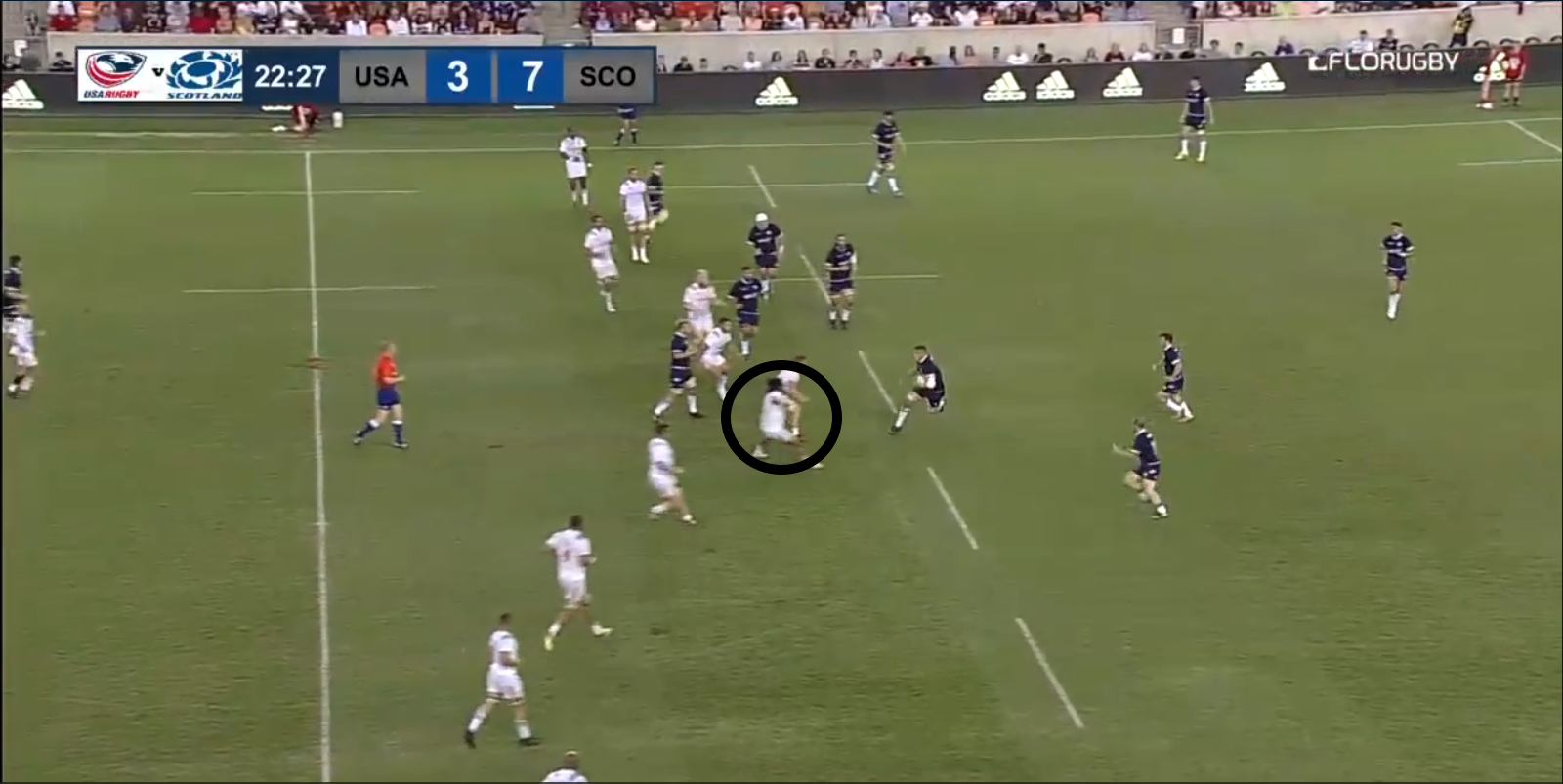 The next phase saw another forward runner again tackled well, this time by Eric Fry, Manoa, and Taufete’e snuck in at the end of the tackle. 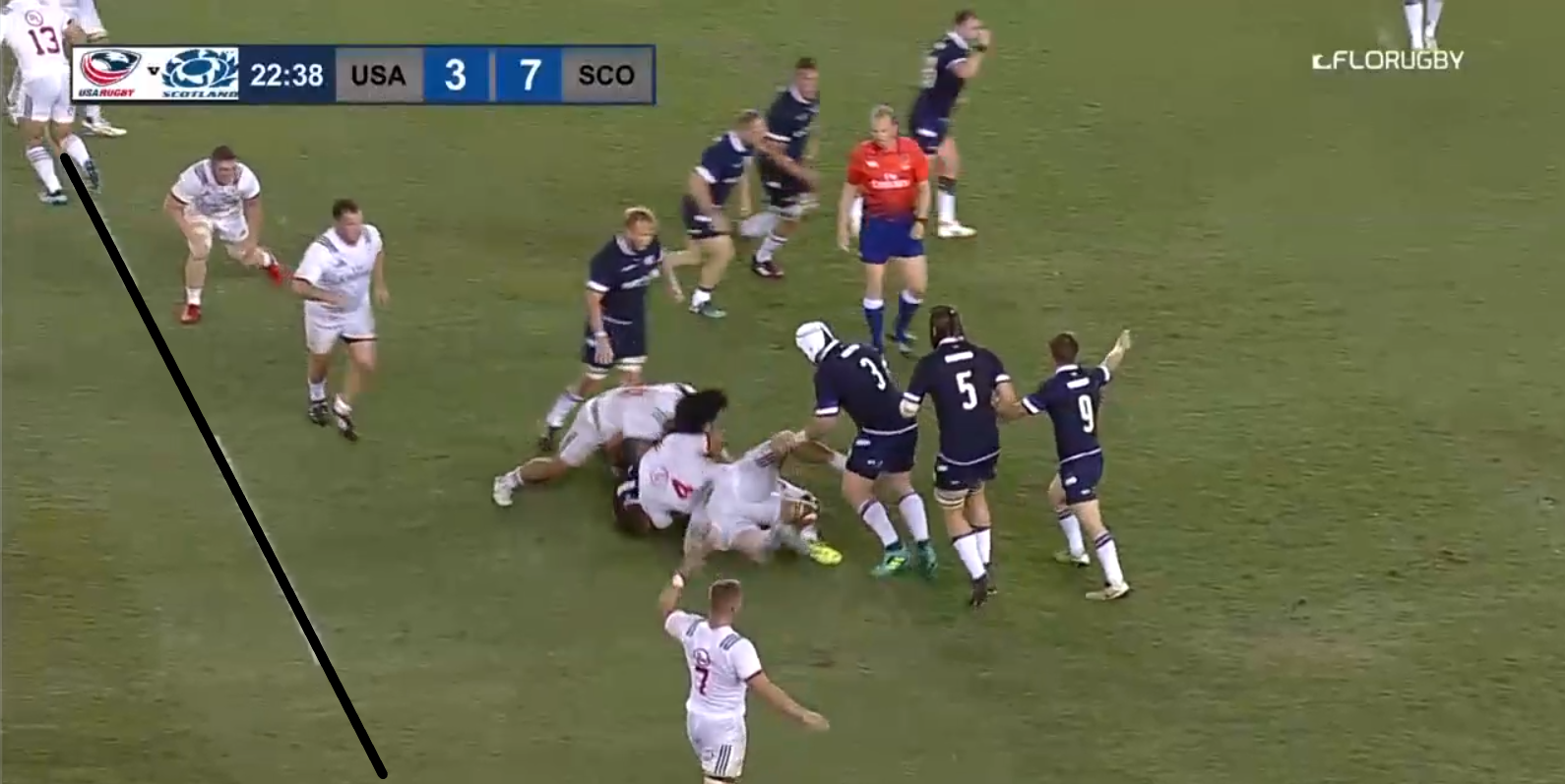 In the past, the Eagles had players who delivered big hits. The important things here are that the first big hit was followed by more hard work and physicality from touchline to touchline, and that there were many moments of Scotland's attack being stifled by strong tackling. The result in this instance was that Scotland kicked.

If the Eagles can repeat the level of tackling, kicking, and scrummaging from this June, more happy days lie ahead.