What to Expect for USA Women in POOL A

Here is some context and some details for what the USA Women will face in pool play at the Olympics. The USA Women are in Pool A in Rio, along with Fiji, Columbia, and Australia. In the best-case scenario for USA, they defeat Fiji and Columbia--which would earn them a spot in the quarterfinals--and then play the final pool match against Australia with no pressure.

There were some important differences between the two most recent World Series. The dominant team this year was Australia. Australia won three of the five tournaments this year, with England and Canada winning the other two. New Zealand won four tournaments in 2014-2015, but none in 2015-2016.

At the end of last season, the USA was only just outside the top four group: Australia, New Zealand, Canada, and England. In fact, they tied England for total points. Since then, that group of four has pulled away from the USA a bit. The best finish for the USA this season was Cup Semifinalist in Brazil.

Still, the USA should finish second in their pool, and that would set them up for a quarterfinal match against either Great Britain or Canada.

On Day One in Rio, they play Fiji first and then Columbia. On Day Two, they face Australia and then, likely, a quarterfinal match.

The best finish for Fiji in 2015-2016 was Plate runner-up in Brazil. USA played Fiji four teams in this year’s series, losing the first and then winning the remaining three.

Fiji finished the World Series in eighth place, both last year and this. Both teams had their best performances this season in Sao Paulo, which was the first tournament of the series and seems a long time ago now. Overall, the sides have played nine times, with USA winning 7. The last time they met was the Plate Semifinal at Clermont-Ferrand, the last leg of the series. USA won 14-12.

They have the pace to stretch Fiji. For sure, USA will miss Kristen Thomas who led the team in tries this year, but they should still have the gas needed to defeat Fiji.

If the Americans get themselves into the right positions, in attack and defense, against Fiji they can execute well. Here are three tries from the Plate Semifinals in Atlanta, which the USA won 38-0, that show this. The personnel will be slightly different in Rio, but the players who have been selected should execute in these situations as well. In addition to showing how USA can defeat Fiji generally, these tries also show, specifically, how important Alev Kelter is.

The first try was scored by Megan Bonny (one of those who will not be in Rio); Kelter helped set it up.

Kelter takes the ball to the line with two players outside her. 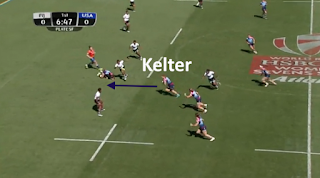 Once Kelter draws in the outside defender, she passes to Megan Bonny. 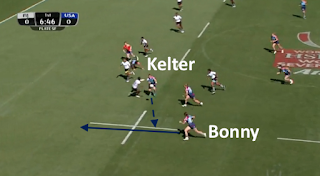 Bonny has enough pace so that no Fijian defender can catch her.

For the next try, Kelter and Bonny are involved again. Fiji puts more pressure on Kelter this time, but Bonny ends up with a relatively simple 2-on-1. 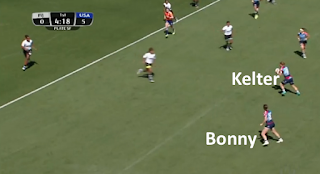 Kate Zackary is on the outside and receives the pass and scores the try. 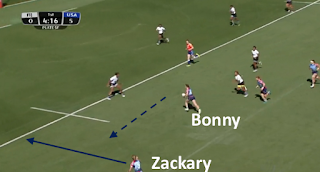 A third try from the same match was the result of Kelter's good work. She passes early to Bonny. 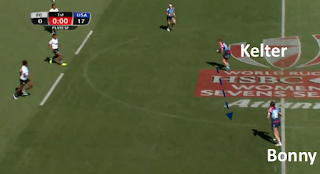 Then she works to get into a good support position. 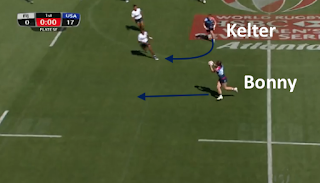 As Bonny gets past her marker and draws in another defender... 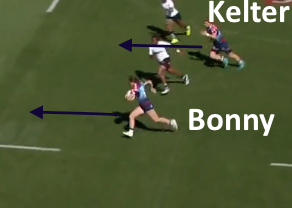 ...Kelter is there to receive the inside pass. 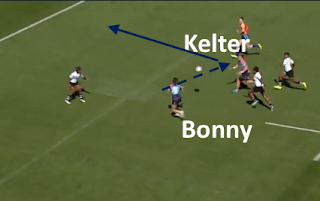 Once she receives the pass, so is too quick to be caught. That is the kind of smart line that makes Kelter so valuable to the USA.  When they play like this, they look so sharp, and the rugby looks so simple.

This match, and their other matches against Fiji, were not without errors. Fiji is good enough to take advantage of errors, so this match in Rio is likely to remain close. But if the USA gets into the right positions, they can control the match. Against the top four sides, everthing becomes much more difficult.

USA has never played Columbia. Columbia played in one World Series event this year and finished in 12th place out of 12 teams.  If the USA lose to Fiji, they will need a big margin of victory over Columbia to still have a chance at the quarterfinals.

Australia won three tournaments this year and was the series' champion. They last played USA in the Cup Quarterfinal in Atlanta. Australia won 22-5.

USA played Australia only twice this year, losing both times.  The aggregate score was 56-5.

Watching USA play Australia is an entirely different kind of match than USA playing Fiji, or most other teams. Australia is talented enough so that even if the USA gets into the right positions, they still might not end up with the right results.

To illustrate that, here are some moments from the Cup Quarterfinals in Atlanta.

The opening kick by USA did not go 10 meters, so Australia had the chance to attack from a free kick. Amy Turner takes the tap, attacks on an angle... 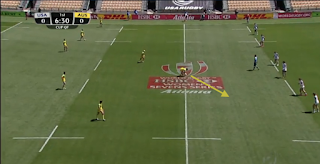 ...and is tackled well. Chloe Dalton receives the pass almost directly behind the tackle area. From that position, it looks like the move is contained. In the picture below, everything looks okay for the USA. 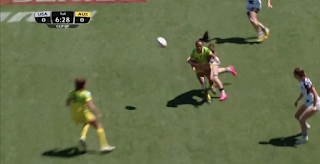 However, Dalton is able to change direction and then get around the outside defender, Bonny. 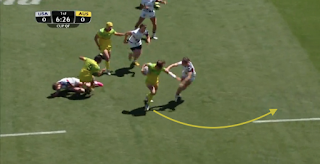 Bonny is able to work back and eventually make the tackle, but the USA is now under serious pressure. Australia win a penalty, take it quickly, and the pressure continues. The next sequence is made even more difficult because Meyer Bizer was injured in making the tackle on Turner. 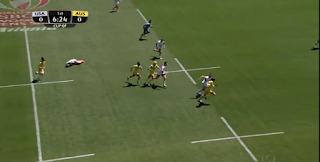 The picture below shows how well Australia is organized as the USA is still sorting out their defensive line. 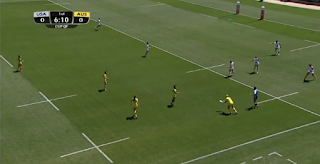 Australia have no trouble shifting the ball wide, stretching the defense, and scoring on this phase.

Not too long after that first try, USA created their own good opportunity, moving the ball wide to Ryan Carlyle. The picture below looks promising for USA. 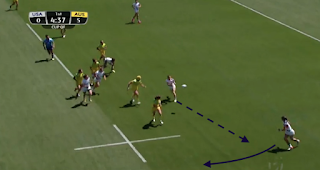 However, Carlyle was not able to turn the corner. She was tackled soon after receiving the ball. The team speed of Australia means that nothing will come easy for USA against them. The USA committed a penalty at the next breakdown, and Australia were back on the attack.

From that penalty, Emma Tonegato makes the first pass to Charlotte Caslick. The picture below shows that the USA defensive line is organized and set. Caslick quickly ponders the options and then makes a decisive run back toward the near touchline. 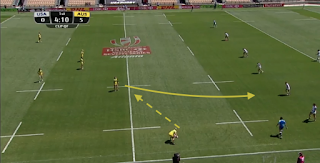 She is quick enough that the outside defender needs to cheat in, leaving Tonegato unmarked on the outside. 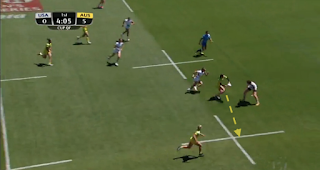 Tonegato will not be caught from there.

This is an example of how Australia's pace creates opportunities, and their high level of skill means they can take advantage of those opportunities.

Below is an example of the USA managing to break through the Australian defensive line. The USA have the ball at midfield, and things look pretty good. Australia is organized, though, and has shown already in this match that they can shift quickly when USA passes wide. 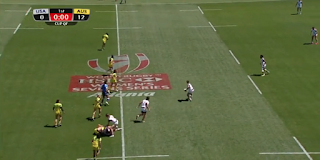 The ball is moved out to Lauren Doyle. 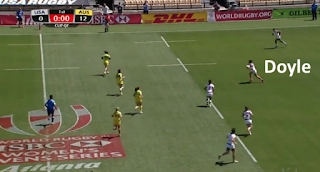 She throws a dummy and then heads up field. 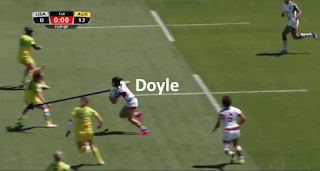 The dummy is good enough and she is quick enough that she is into the clear. 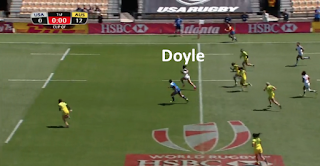 Sort of into the clear, because she is tracked down and tackled. Even with that excellent, clean line break, the USA ends the half without a score. Those last two examples, one in defense and one in attack, show the USA being in a strong position that ended up not being enough.

Before the match ended, Jessica Javelet did get a try. If USA is going to upset Australia, Javelet, with her pace and strength, will need to be prominent.

Making the quarterfinals is the low-level expectation for the USA Women. If the squad they are taking plays its best over the three days, a medal is certainly a possibility. That kind of performance would be a step up from the World Series performances, but there is no better time to take that step than the Olympics.